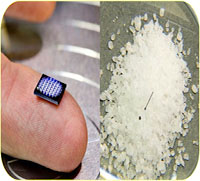 Not to be outdone by the "world smallest computer" IBM revealed in March, a team at the University of Michigan is calling IBM's bluff with an even smaller computer that's "dwarfed by a grain of rice," measuring just 0.33mm on each side. The university initially held the "world's smallest" trophy with its 2mm x 2mm x 4mm Michigan Micro Mote until IBM's smaller-than-salt 1mm x 1mm computer entered the scene earlier this year.


Although the word "computer" brings an image of a miniaturized PC sitting on the tip of your finger, the Michigan team now questions the term. When you power off a desktop or laptop, all the programs and data still reside on the device's internal storage. Boot up the device, and all your cat videos, games, documents reappear. That can't be said with these "computers" created by IBM and the Michigan team.

The team's new "computer" uses photovoltaics to convert light into electricity. It also consists of a processor, system memory, and wireless transmitters and receivers that send and receive data through light. The package is a base station that feeds the computer with light for power and programming. The station also gets all data transmissions.

Currently, the tiny computer serves as a precision temperature sensor. It uses electronic pulses to convert temperatures into timed intervals. The result, for example, is the ability to report temperatures in a cluster of cells within a tumor with an error rate of around 0.1 degrees Celsius.

"Since the temperature sensor is small and biocompatible, we can implant it into a mouse, and cancer cells grow around it," said Gary Luker, radiology and biomedical engineering professor. "We are using this temperature sensor to investigate variations in temperature within a tumor versus normal tissue and if we can use changes in temperature to determine success or failure of therapy."

The team chose this task due to a need in oncology. Still, the computer is flexible enough to be attuned to various conditions such as audio and video surveillance, oil reservoir monitoring, cancer studies, and more. Once it goes live, other parties will likely discover new uses not imagined by the Michigan team, just as they did with the Michigan Micro Mote.

At the Michigan team's helm is David Blaauw, an electrical and computer engineering (ECE). He's joined by ECE professor Dennis Sylvester and Jamie Phillips, an Arthur F. Thurnau Professor, and professor of ECE. In addition, Gary Luker is a longstanding collaborator who needed answers to questions about temperatures in tumors.

The road to getting the computer in working order wasn't easy. Given its size, the system packaging is transparent, thus exposing the tiny circuits to the base station's light and the computer's own transmission LED. As a result, the team had to take a different route regarding circuit design. "We basically had to invent new ways of approaching circuit design that would be equally low power but could also tolerate light," Blaauw said.